Always Remember Us This Way: Boris plays the hits at CPC high on optimism but (some might say) low on policy and delivery 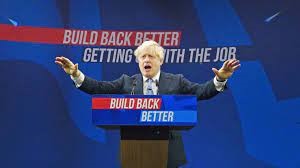 “…music is essentially twelve notes between any octave. Twelve notes and the octave repeats. It’s the same story. Told over and over. Forever. All any artist can offer the world is how they see those twelve notes. That’s it.”

Why am I quoting from Bradley Cooper’s remake of A Star is Born, you may ask? Isn’t this supposed to be about the Tory Party Conference? Well, yes. But whilst watching the speeches of Sunak, Gove, Johnson and Co., one could be forgiven for thinking that we’ve heard this all before:

But whilst the notes may be the same, Boris Johnson sees them very differently to his predecessors.

We’ve seen Boris Johnson as the main attraction at conferences past, but this was different. This crowd was not here to see the Leader of the Conservative and Unionist Party or the Prime Minister of the United Kingdom of Great Britain and Northern Ireland; they were here for ‘Boris’. And like any rockstar worth their salt, he knows what his fanbase wants: The Hits.

Alliterated insults. Convoluted historical references. A central thrust of positivity and national pride. A retelling of the evacuation of Kabul in the style of A Bridge Too Far – it had it all.

And in between his cover version of a Conference address: the vision. What does levelling up really mean? Apparently, it’s about solving “the national productivity puzzle” that has confounded successive governments. And how do we do this?

Riveting stuff. But close readings of Johnson’s speech and that of Michael Gove (or Jon Bon Govi, depending on your preference), the newly minted Secretary of State for the rebranded Department for Levelling Up, Housing and Communities, revealed very little in terms of how this would be accomplished.

Both Gove and Johnson stressed the importance of home ownership, the former singling out Thatcher’s Right to Buy, the latter pointing to 95% mortgages and record housebuilding numbers. But whilst ‘homes’ were mentioned six times in each of their speeches, one word was conspicuously absent: planning.

Because for all of the rhetoric this week at CPC21, how this government intends to deliver this change is still up-in-the-air. If recent reports are to be believed, the government’s planning reforms will be significantly watered down. The Planning for the Future White Paper was, in Johnson’s own words, an attempt to make the planning system more “efficient, effective and equitable”. Without these reforms, how does he intend to fix what he terms a “broken housing market”, the bedrock of the levelling up agenda?

With a fast-approaching Winter of Discontent likely to wipe out the optimism on display this week, these questions will continue to linger until the government releases its revised planning reforms.

Until then, it seems we are destined to hear the same promises at CPC22. The same twelve notes. The same story. Told over and over. But this crowd won’t mind – they love the way Boris sees it.