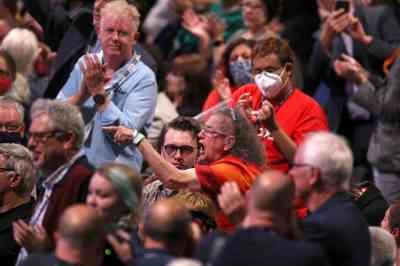 It’s fair to say that the first 18 months of leading the Labour Party have not been easy for Kier Starmer. He became Leader at the start of the pandemic and, since then, has largely been unable to connect with people face-to-face and has had to begin the job of opposing the Government at a time when ‘politics as usual’ has been suspended.

Despite a tricky start where it looked as if the conference risked being dominated by gender issues and the use by Labour’s Deputy Leader, Angela Rayner, of some ‘unkind’ language about Boris Johnson, it looks as though the conference has, overall, been a success for Starmer. His speech on Wednesday, along with some policy announcements and changes to the rules around the election of Labour leaders, succeeded in giving the nation an understanding of what motivates him, enabled him to set out his vision and (with the help of a few hecklers in the conference hall) demonstrate that he is making a clean break with Corbynism.

Key takeaways for the development and regeneration industries

The imperative to start defining where Labour stands and developing its policy positions means that there is a lot to digest as the conference winds down. Redwood has reviewed the Party’s policy announcements alongside soundings from the conference fringe to produce a guide to what is most relevant for the development industry:

Labour is seeking to claim the mantle of levelling up as its own and define it in its own terms. It is also capitalising on the backlash against the Conservatives’ proposed planning reforms.

The most tangible policy announcement was a commitment by the Shadow Chancellor, Rachel Reeves MP, to scrap business rates in their current form. The Party has yet to announce what will replace it, but their commitment plays into a long-running campaign within the business community to address disparities in business rates that harm high streets. The intention is to insert Labour into this debate and position it on the side of small businesses. The speech to conference by the Shadow Secretary of State for Communities & Local Government, Steve Reed MP (former Leader of Lambeth Council), was light on detail but started to set out a direction of travel based around partnership between local authorities and developers and community involvement: “The Conservatives want to gag residents and let their developer donors bulldoze local neighbourhoods. Labour will put local people in the driving seat by guaranteeing them a say over where they live”.

Labour’s path back to power is likely to be a long one; however, if Kier Starmer starts to make an impact, then Labour’s positioning, as outlined by Steve Reed, may have an impact on Michael Gove’s decision on the future of the Planning Bill. Remember also that, in order to become Prime Minister at the next General Election, Starmer would need to take more seats than Tony Blair did at the 1997 landslide. Therefore, he would be well advised to consider the compatibility of their emerging policy with potential coalition partners. Reed’s positioning will sit well with the Lib Dems, who are targeting Tory seats in the Home Counties and using the Planning White Paper as a strong campaigning theme.

Conservatives often accuse the Labour party of talking a lot about how they will spend people’s money but not how they will grow the economy and generate the revenues needed to support public services. Starmer’s speech positioned Labour as a party that will be careful with taxpayers’ money and which will also be a friend to industry, creating jobs and boosting the economy.

It is hard to imagine his predecessor saying the following words: “I have no doubt that the small businesses of this country are the next generation wealth creators. I want to see enterprising creative companies. I want to see them make a profit and employ more people. I want to create the conditions in which inventive small businesses can grow into inventive big businesses”. Indeed, the hand of Peter Mandelson, the architect of New Labour, who has been advising Starmer and who once said that he was “intensely relaxed about people becoming filthy rich, so long as they pay their taxes”, was very much in evidence.

Of course, Labour is not in power, but these words are likely to influence and even embolden Labour council leaders across the country as they look to help their town centres and communities recover from the pandemic.

Starmer invoked the achievements of the last Labour Government in his attempt to seize from Johnson, the levelling-up ‘mantle’

If one of your Party’s former leaders had won three elections in a row – two of them in landslides – and with majorities that, when combined, far exceeded those won by Margaret Thatcher, you would expect that he would feature a lot in Party discourse. Not so Labour and its relationship with Tony Blair. The anger with him across much of the Party over the Iraq War has meant, in some cases, that people can scarcely bring themselves to mention his name, let alone acknowledge some of Labour’s achievements under him and Gordon Brown. The problem for the party in not acknowledging him has been raised by some voices on the left, such as this article by Zoe Williams in the Guardian in 2014.

It was notable, therefore, that Starmer chose to list the achievements of the Blair/Brown governments of 1997 to 2010. His emerging pitch to voters is that Boris Johnson has no plan beyond ‘getting Brexit done’ and indulges in trivia. In contrast, Starmer is trying to portray himself as a statesman to Johnson’s showman and evidencing that Labour has a track record in levelling up helps to strengthen his case.

In this and other ways (including rule changes for electing the leader that would make it more difficult for a hard-left candidate to get onto the ballot paper), Starmer signalled clearly that he will prioritise getting back into power over Party unity. Although he achieved his objectives at conference and bested those who heckled him on the conference floor (Big Brother fans will recognise the lady in the picture above as Carole Vincent from series 8) the battle with the hard-left will not be easy. He will also need to be very careful with the language that he deploys in relationship to his predecessor’s legacy – bearing in mind that, during the 2015 Labour leadership election when Corbyn was first elected, 49% of existing Labour members voted for him (as well as 83% of new supporters who joined the Party).

4. Boats rise and fall with the tide

Although many Labour politicians at a local level will be inspired by and act according to the direction of travel set out by Labour’s top team, those engaging with Labour-run authorities still need to be mindful of the tension between different wings of the party, which have always been present. A proposed housing development or town centre regeneration proposal will not be viewed in a vacuum by decision-makers and may be influenced by the shifting dynamic between the Labour Party’s different wings.

If the perception of Starmer improves at a national level then Labour politicians at a local level are emboldened in taking the initiative – particularly those who subscribe to Starmer’s politics. However, his opponents on the hard-left will not go away without a fight, and that battle is likely to influence local politics and local political decisions for years to come.